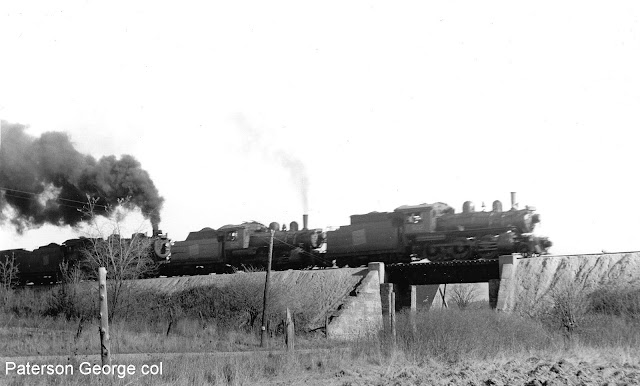 While a crown corporation, Canadian National benefited from rather unique fiscal circumstance. Unaccountable to share holders, the railway could deploy monies to discretionary endeavours, such as Research and Development, without undue monetary scrutiny. Not that this was unfruitful. Via R&D CN developed the industry standard locomotive ‘Safety Cab’ and played a significant role in the creation of traction control (see the CNRHA book CNR Diesel Locomotives – Vol. II). Another optional expenditure: locomotive rebuilding. While most Class One roads engaged in motive power remanufacture, CN’s were among the most extensive, in both volume and scope. Best known is the GP9RM rebuild program. The elaborate remanufacturing process more than doubled the life of a couple hundred of Dick Dilworth’s masterpieces. Not nearly as numerous, but perhaps more drastic appearance wise was the SW1200RM, or ‘SWEEP’ (as the unit was affectionately known). Seeking to create a more capable/reliable switcher, PSC upgraded the prime mover (567C to 645C/1300 HP), improved cooling by grafting a GP9 hood (switcher type cooling via belt driven fans had long been a maintenance headache), and enhanced cab creature comforts (insulation/heating/hot plates/refrigerator). For more details see pages 170 – 171 of CNR Diesel Locomotives Vol. II. Only eight SWEEP’s were completed; CN ultimately decided to remanufacture a small group of SW1200RS’s in kind, and deploy 7000/7200 series GP9RM’s into yard service (often with accompanying slugs).

Following the disruption to the former H&NW line at the Stone Church Road overpass in 1987 (see CN Rymal Pt. 2) all train movements to service Rymal were dispatched northward from the southern terminus. As previously described, at about the same time, activity at Rymal had increased marginally beyond the existing enterprises with the arrival of a building products distributor. The new enterprise employed the CO-OP siding to receive a variety of bulkhead flat cars laden with drywall and assorted construction materials. The pint sized train shown in Caledonia is representative of the Rymal related traffic pattern at the sunset of line; the empty bulkhead flatcar having delivered drywall or lumber to the CO-OP siding (see CN Rymal Pt. 4), the loaded bulkhead flatcar having picked up coated aluminum extruded tubing from Shaw Pipe Protection. As previously depicted, the crew elected to save time and not place the caboose in the trailing position (see CN Rymal Pt. 6). Not surprisingly, the same view today is very different; both structures in the background have been razed, and most of the track shown has been lifted. In addition, the Argyle St. grade crossing behind the photographer has been removed and paved over. However, not all of the news is bad; the derelict (at the time) Caledonia Station out of frame to the left has been lovingly, authentically restored to its former glory. As well, Canadian National has repatriated the Hagersville sub from the short line sub-lease and is actively upgrading the line.

As is well known, Richard M Dilworth was the creator of the landmark, historically ubiquitous ‘General Purpose’ masterpiece locomotive series. Following the introductory 1,500 HP GP7 was the marginally more powerful GP9 at 1,750 HP. GP9’s enjoyed a long production run in both the US and Canada and were offered in several forms; with or without dynamic brakes, with or without steam generators, high nose or low nose to name some of the versions. North of the border CN collaborated with EMD affiliate GMD to create a uniquely Canadian variant; the go anywhere, lightweight version.

Following the introduction of the GP9 to subsidiary Grand Trunk Western the prior year, CN would acquire their first ‘off the shelf’, standard version GP9’s in 1955. So as to expand their utility on the railway’s vast expanse of secondary trackage, CN worked with the GMD London Ontario plant to create a reduced mass version. By fitting smaller fuel tanks and swapping out ‘Blomberg’ trucks for ‘Flexicoil’ style, GMD was able to shave off as much as nine tons from the standard GP9 weight. The first six of the featherweight GP9’s arrived in November of 1956 (CN 4496 – 4501) and CN would eventually assemble a fleet of 192. CN’s mostly western Canada based network of marginal track work would initially script their principal operational region. As the volume prairie trackage diminished, many of the underweight GP9’s migrated east, several of which would eventually call the Stuart Street Yard in Hamilton home.

GP9 4351, built 10/1959 by GMD London, was remanufactured by AMF Technotransport in 1993 as GP9RM 7277 and is still active. Note the larger 48” diameter cooling fans, a late model GP9 production feature, and centrally mounted air tank adjacent to the undersized fuel tank. Note also the early application of so called ‘ditch lights’ hung from the end handrails. 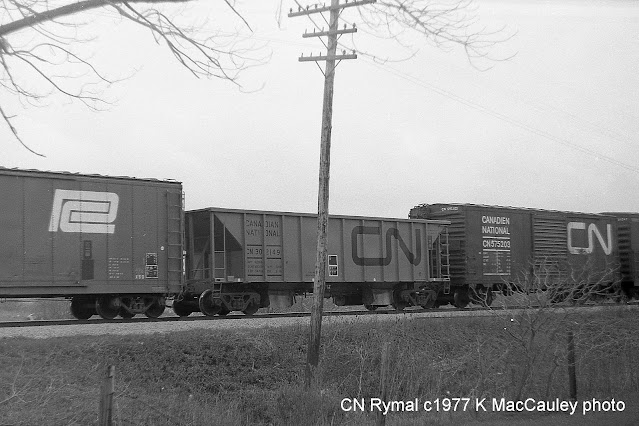 With its vast, far flung system, Canadian National has historically always been subject to large scale motive power acquisitions. During the steam era the national carrier would assemble the largest fleet of Northern Type (4-8-4) locomotives; some two hundred and three. The diesel era would be no different; so called first generation motive power, among much builder variety, would be dominated by hundreds of Richard M Dilworth’s fabulous ‘Geep’s’ (system GP9 total: 434). The second generation of motive power would initially be populated by over two hundred SD40’s, delivered in the late 1960’s, followed a few years later by an even larger number of GP40-2’s fitted with the infamous CN developed ‘Comfort Cab’ or ‘Safety Cab’.

In a repeat of history (the Northern Pacific Railway acquired the first 4-8-4 and established the ‘Northern’ name), while Canadian National would amass the largest fleet of GMD GP40-2’s they did not receive the first. That honour would to GO Transit when it took delivery of No. 9808 in December of 1973, three months ahead of CN 9400. CN would go on to order a total of two hundred and sixty-eight wide cab GP40-2’s from GMD and, in 1991, add ten of the eleven built for GO Transit.