Today's Throwback Thursday features a guest contributor, my dad Keith. Here's his article on some CN GP9 action in the Steel City, back in the day (March 4, 1983). Thanks dad!
- Peter.

In this image we find back to back Canadian National Railways GP9’s Nos. 4536 and 4565 powering a relatively short mixed freight past the CN HAMILTON JCT. sign board as they head northwest (RR east) to merge onto the Dundas Subdivision and exit the ‘Steel City’. In the background above the tank cars is the York Boulevard structure known locally as the ‘High Level Bridge’. Note that 4536 is leading the consist long hood forward as Dick Dilworth intended when he created the legendary EMD GP diesel road switcher platform back in 1949. Perhaps not immediately obvious; the ‘Zebra Stripes’ on No. 4536 have been applied in reverse! (aside from CLC CFA/CPA/CPB’s GMD F/FP’s and MLW FA/FPA’s, the stripes should align on coupled units regardless of operating direction). Spotting features of the mid-production 1957 GMD-built GP9’s are twin 36” fans above each radiator section and a longitudinal fuel tank tucked under the frame between the trucks. Standard CN-issued accessories include the skate style cab roof antenna, below cab hanging re-railers, barrel-style spark arrestors, winterization hatch above the end radiator section, forward mounted bell, MU connections and cross over platforms. Note that 4536’s foot boards are still in place! Trailing the 16-567 powered duo is one of CN’s then-numerous boxcar come caboose (aka ‘van’) created at the mammoth Montreal based Pointe St. Charles facility. Attached to the PSC van are a couple of CN’s modernized 40 ft. boxcars (shortened ladders – no roof walks) and a hodge-podge variety of freight cars. Vans at both ends of the consist most likely imply that the crew has a long afternoon of switching ahead of them in Brantford involving a number of reverse moves requiring crew protection.

Remarkably, the overall scene above is little changed today, although work is currently ongoing that will significantly alter the landscape – a project was recently launched to widen the grade such that a third mainline track can be added adjacent to the bay side right of way. Noteworthy ‘can you spot the differences’ include removal of the maintenance shed (above the first 40 ft. boxcar) and track immediately parallel to 4536 (which actually stub ended a couple hundred yards past the signal). As well, unseen in the distance is enhanced track work under the High Level Bridge added several years ago to bring GO Train service to the former T, H & B Hunter Street station. No doubt the signals shown have been revised and updated.

What has become of the GP9 duo? Incredibly, both are still extant. No. 4536 was remanufactured in 1992 into GP9Rm #7053 by Pt. Ste. Charles and continued to serve her original owner until late 2010. Declared surplus, the unit was sold off and is now part of the Rail Trust Equipment Fleet as RTEX 7053. Wearing her fifth (at least) paint scheme, she is currently dressed in an attractive black with diagonal orange end stripes design (http://www.rrpicturearchives.net/showPicture.aspx?id=3401167). Similarly, 4565 was remanufactured by PSC into GPRM #7231 in 1986 and continues to serve her original owner on Canada’s west coast out of Prince George in central British Columbia. (http://www.rrpicturearchives.net/showPicture.aspx?id=1595368) 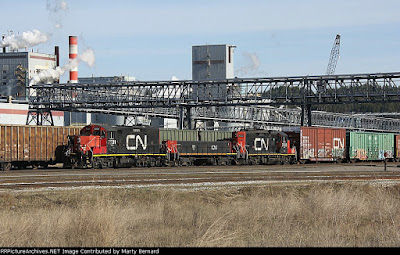 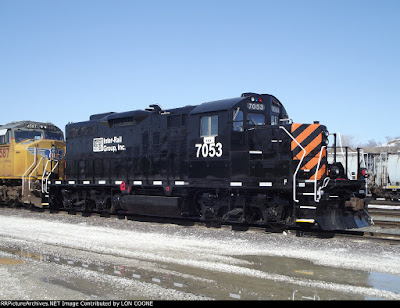 Otherwise, the PSC van and 40 ft. boxcars are of course long gone, as would be any unrebuilt freight car from the consist manufactured prior to July 1, 1974 (freight cars built prior to July 1, 1974 are limited to an AAR Interchange life of 40 years, those built after; 50 years). Most likely the steel is still with us, albeit recycled into another form - I wonder if Gillette bought any of the steel from these cars?! 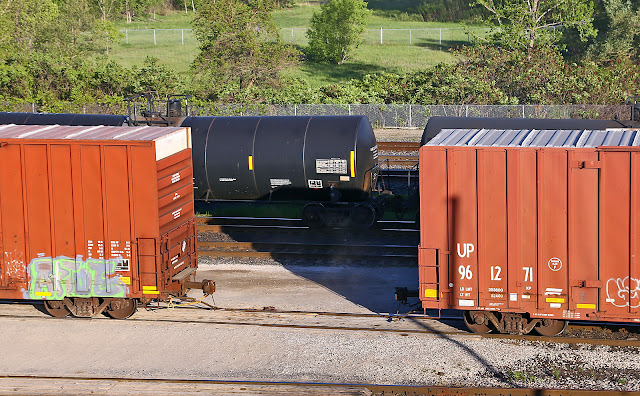