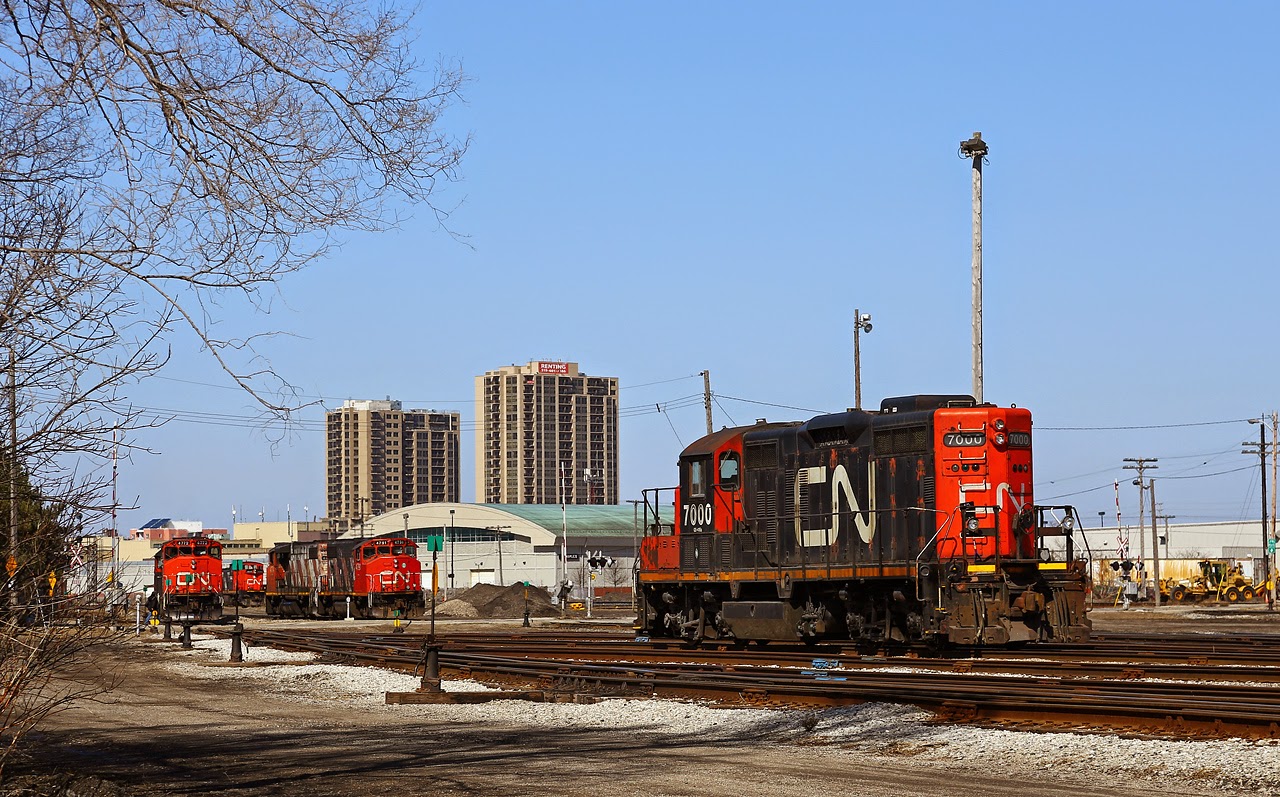 In lieu of getting any actual work done on the layout this week I thought I’d write about one of the industries I plan to model. Known locally as Casco (Canada Starch Company), the London, ON plant manufactures corn sweeteners, starches, and associated corn-based products. Built in 1979 alongside the CN (ex-L&PS) Talbot sub in south London, ON next to the 401 highway, the plant relies heavily on rail transport to distribute its’ products (though some product is shipped out to local destinations by truck). Casco has been a wholly-owned subsidiary of the US giant Corn Products International since 1958; Corn Products was recently Ingredion a year or so ago.

Corn arrives by truck from the abundant supply provided by farms in southern Ontario. From there it is crushed and processed into various grades of sweeteners and starches.  Corn Products owns a fleet of their own tank cars to transport their products (CCLX reporting mark), however also leases a large fleet of tank cars from private owners. The plant is switched on an almost-daily basis by a CN local originating from that company’s yard in London (CN 584). Occasionally if CN 584 runs out of time, or if Casco requires an extra switch, the London yard job will run down to switch the plant. Casco leases a track in the CN London yard for storage of cars not immediately needed in service or at the plant. This is an arrangement worked out to avoid excessive demurrage fees and is mutually beneficial to both parties as the CN yard is never full and thus does not present a problem with capacity shortage. Another interesting aspect of this leased track is that the plant will request specific cars to be delivered, so the yard crew often has to “cherry-pick” selected cars from those on the leased track. Sometimes this requires pulling almost the entire track to fish out a certain car, since all switching at the yard is done from the east end. Each switch can range from 5-12 cars (occasionally more), with a similar number of loads returned.

Corn syrup is shipped in both 263K GRL and 286K GRL cars, depending on specific grade and end-customer for the product. Often, customers are located on branches or spurs (often on shortlines) that cannot handle 286K cars, so there are still many 263K cars in service despite the capacity difference of about 4,000 gallons (15,000 vs 19,000). Fortunately for modelers, a variety of rolling stock (HO scale, at least) are available to model the operation from Atlas, Intermountain, and Walthers. Intermountain makes a Trinity Industries 19,000 gal 286K tank car model, some decorated for Corn Products. Atlas produces a Trinity 15,000 gal (263K) corn syrup tank car model (some decorated for Casco/GATX/CCLX), as well as ACF pressure-differential hoppers used to transport bulk dry starch. Walthers offers a Union Tank Car prototype 263K model decorated for several corn products manufacturers, though it is based on a caustic soda tank car prototype (about 13,000 gals). Additionally, Highball Graphics offers decal sets for Casco-leased cars with PROX (Procor) reporting marks. The Casco logo was applied to cars with PROX, UTLX, and GATX, however is slowly disappearing as cars are shopped or repainted, a victim of being merged into the Corn Products/Ingredion corporate identity.

A corn syrup plant would make an interesting industry to model on an HO scale layout. In addition to interesting operations, the plant structure itself can be a centerpiece on the layout. In the image above, a Google satellite overhead shot of the London plant shows numerous buildings, silos, and tracks. Separate buildings/tracks are designated for the loading of hopper cars (dry starch) and tank cars. Even trackmobile operation is possible using the Broadway Limited HO scale trackmobile model. The operation can be scaled down if space does not permit modeling the entire plant (as I plant to do). Casco’s Port Colborne plant is much smaller than the London plant, and would also make a good modeling candidate. Additionally, one can include a dump shed to represent grain brought in by rail instead of truck (the Port Colborne plant uses both truck and rail to bring in corn). This can increase the number of cars to be switched into the plant, as well as the time it takes to switch the plant (which I don’t consider to be a bad thing!).

Hopefully this article will give you a better understanding of corn products plant operations – it is by no means a complete narrative of the corn refining industry, but rather is intended to explain the railway aspect of the business.

Cheers,
Peter.
Posted by Unknown at 19:32 No comments:

I took a few minutes on the weekend to sketch a trackplan of the layout. I tried to create one digitally in paint or Powerpoint but that proved to be nothing more than an exercise in frustration; I'll revisit that another day... Anyway, the attached is a somewhat-freehand pencil drawing that shows all track planned and in place. I'd estimate that the trackwork is about 70% done, with the balance to be laid on the east (bottom in the sketch) spur, grain elevator tracks and the shop area. The names of some of the tracks and industries have been added in Photoshop. I'll create another post later on to describe the industries to be modeled and car types/switching operations. 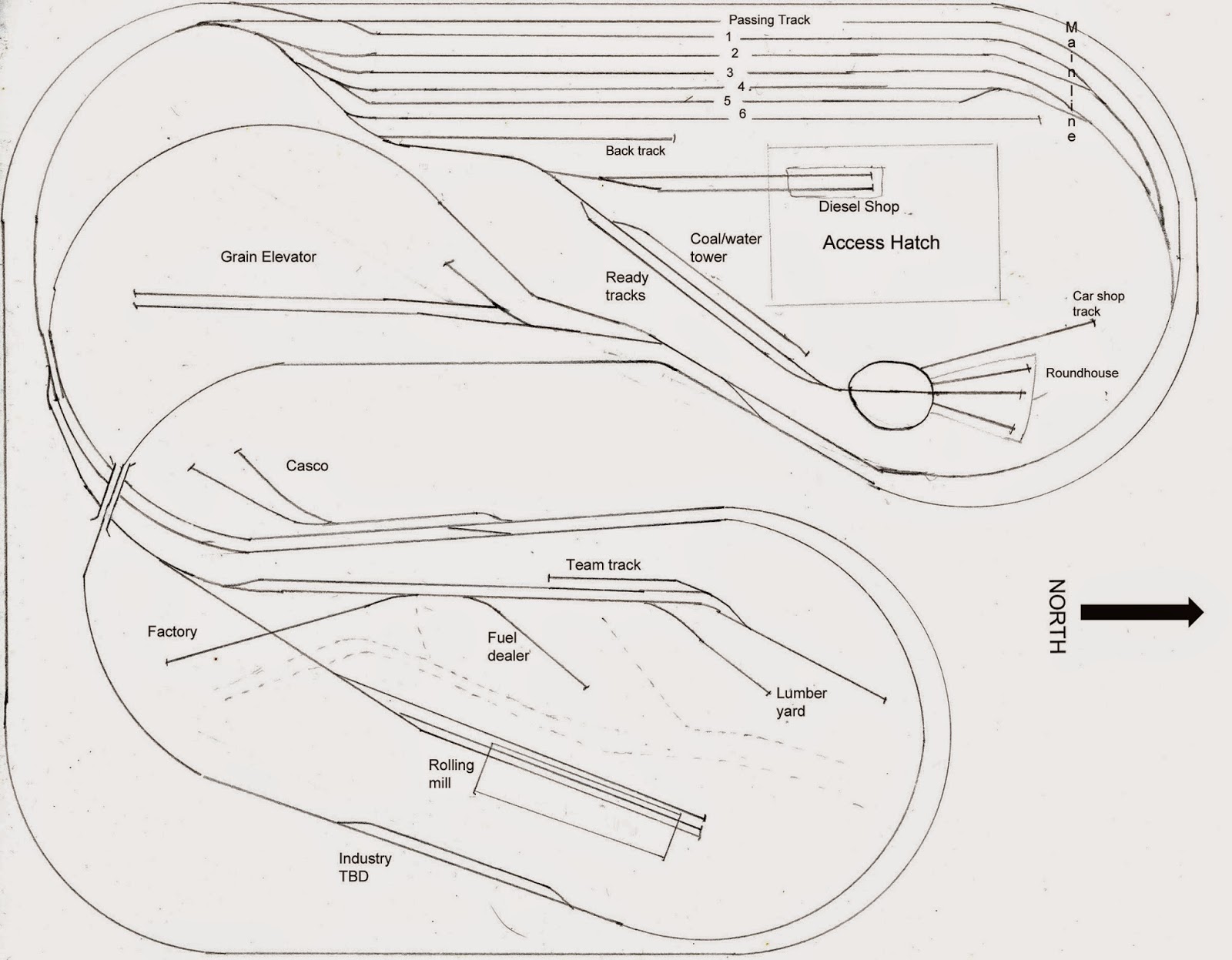 At the moment, the plan is to have the trackwork on the spur and grain elevator completed within two weeks, and if that goes according to schedule, some photos will follow. I can't wait to get down to switching cars! The track gang is still assembling materials and completing the final details for the shop area and roundhouse. A turntable has been acquired and the next step will be to cut a hole in the plywood to mount it. From there, the trackwork details can be ironed out. I'll have to remember to have a gold spike ceremony once the last one is driven in; until then, thanks for stopping by...

Cheers,
Peter.
Posted by Unknown at 18:19 No comments:

It occurred to me that a blog about a model railroad would seem odd if there were no photos of said model railroad. So here are a couple photos of the progress that the track gang has made over the last few months. A six-track yard (plus passing track) was installed using Shinohara and Atlas switches and Peco track. The yard is code 70, with the passing track and main line code 83. The layout is oriented with the aisle running north-south, so it is divided into the ‘east half’ and ‘west half’ for the time being; someday we’ll get around to assigning proper names to the various tracks and locations. The yard is on the west half with curved north and south yard leads to maximize the track lengths. A spur will be run to the east side to serve about 3-4 industries.

So far we have been successful in running trains on DCC on the layout with few derailments. Most have been attributed to cars with narrow wheelset gauge, or tight trucks leading to rail-climb derailments. The north yard ladder was found to have a couple trouble spots so a # 4 turnout from the passing track to the ladder was replaced with a longer-radius curved turnout. This helped smooth operations by eliminating the derailments caused by the sharp curve and the short transition from the level of the passing track to the yard. Next step will be to add some form of turnout control to the north end since it is not accessible for switching operations (unless access hatch is removed). At this point, both electrical and mechanical turnout controls are being studied but no decision has been made yet as to how we'll proceed. The south end of the yard has been outfitted with Caboose Industries ground throws since it is within reach and this is likely where the majority of the switching will take place.

Thanks for stopping by,
Cheers,
Peter.
Posted by Unknown at 09:52 No comments:

This is the first post in my new blog so I’d like to introduce myself and the aim of this blog. My name is Peter and I have been interested in trains as long as I can remember. Part of that interest, a large part in fact, includes model railroading. My interest is in modern-day CN and CP operations, with some shortline modeling as well (GEXR, OSR). I have been reading several other model railroad blogs for some time now and it has inspired me to start my own. Hence, the idea of this blog is to document the progress on my home layout, as well as some prototype photos as well.

I say ‘my’ home layout, but in fact it was started by my dad about 20 years ago. He designed most of the track plan, and completed the benchwork and the majority of the track work. My brother Mark and I are now working with dad to complete the trackwork and at the same time convert the layout to DCC. I’ll post more info and a track plan later, but hopefully this brings you up to speed with where I’ll start this blog. I hope in the foreseeable future to get the trackwork running reliably and start adding some scenery to the layout.

Well, the short answer is that I had to call this blog something. The long answer is that it seems many modelers name their layout or blog after something meaningful to them or their modeling. Rymal was a small hamlet on the south edge of Hamilton, ON, and bears the name of William Rymal, an early settler of the area; it has long since been amalgamated with the city of Hamilton. Rymal, sometimes referred to as Dartnall or Hannon, was important enough to warrant a station on the CNR line from Hamilton to Jarvis (originally Hamilton & Lake Erie; I’ll post more info on the station itself later). This was the line made famous for its’ street running down the middle of Ferguson Ave in Hamilton, and later the use of an A-B-A set of F7’s on the Hamilton-Nanticoke steel train; again, more info to be posted on the steel train later on. My house is located about four miles from where the station stood, and my dad grew up less than a mile from the station’s location (though it was demolished about three years before he was born). And at one time many years ago, my great-grandfather ran the Rymal feed mill (actually named Ancaster feed mill for reasons long lost to history), and would bring in boxcars of grain to the siding at Rymal for use as animal feed. So not only was it geographically the closest rail point of interest, but in some strange way it seems to make sense.

I’ll try to update this blog as often as time permits, but until then, thanks for stopping by!