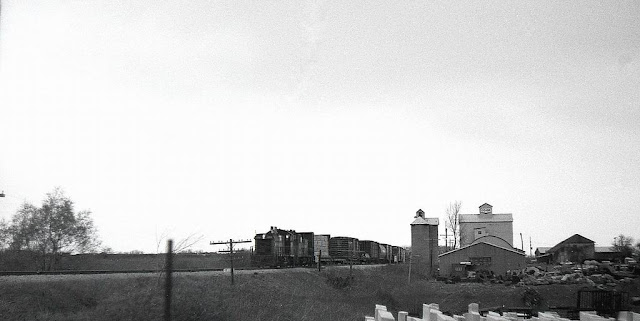 Passenger train service on the H&NW Railway would be inaugurated from Hamilton to Jarvis on September 18th, 1873 when the first train departed from the Ferguson Avenue Station in the lower city. Like many branch line runs the service would in time transition into a mixed train; M233. The last run of M233 would take place some eighty four years later on October 26th, 1957. For a nostalgic look at the line in the 1950’s have a read of Ian Wilson’s wonderful chronicle ‘STEAM ECHOES OF HAMILTON’.
By comparison, freight train service along the line south from Hamilton would last for more than a century, finally concluding in late 1993. As previously documented, damage to the Stone Church road overpass in 1987 would suspend service from Hamilton to Rymal. Only six years later the rails would be lifted all the way from the lower city to Caledonia. Enough with the history lesson, let’s fondly recall an everyday exercise in the life of the daily wayfreight; switching Shaw Pipe Protection at Rymal. (Unfortunately I did not date some of my early images; best guess is that I shot the switching sequence of photos in the spring of 1977)


As shown above, CN SW1200RS’s Nos. 1208 and 1204 have arrived at the CO-OP siding and pulled up to the south switch. After uncoupling and moving ahead with the first two cars, the short two car consist would reverse into the siding and deposit the loaded bulkhead flat car and empty flat car. The locomotive duo would then head south to exit the siding, reverse direction, re-couple and push the remainder of the consist back past the north switch. Following another reverse in direction, 1208/1204 would reenter the siding and couple onto the empty flat car from the opposite end, and once again reverse onto the main. Heading south, the one car train would then cross Rymal road to complete the delivery. Note the careful planning of the head end of the consist during assembly at CN’s Stuart Street Yard.

Hello Readers - No, I haven't abandoned the hobby, but a new job and generally not doing much modelling or railway-related activities throughout the summer have tended to keep me away from the blog... Anyway, we're back - my dad Keith has previously contributed material to the blog, and I've figured out how to add him as an author so he will now contribute original material to the blog. Additionally, I'm  slowly getting back into the hobby during the "indoor" months and should have some more modelling material to share over the next few weeks. Tonight's post is from my dad, on the remarkable similarities between the Canadian National Railway & New Haven Railroad diesel locomotive paint schemes of the 1960's, in particular as applied their SW1200's.

Background information on the Canadian National half of the story came in large part from Lorne Perry. Perhaps a name familiar to some, Lorne worked for many years at CN in Public Relations, retiring in 1992. Most generously he provided a wealth of information and insight on the rebranding effort the railway undertook in the late 1950’s.

As has been very well documented over the years, the 1950’s were a decade of tremendous upheaval and change for the railway industry on many fronts. As steam power was eschewed and diesel electric propulsion embraced, a number of railways sought to re-brand themselves and adopt a modern, contemporary image.

The New York, New Haven and Hartford Railroad, under the leadership of newly minted president Patrick B. McGinnis, was first out of the gate. Following the remodeling of its corporate offices in Grand Central Terminal in early 1954, McGinnis contracted the NYC based firm Knoll Associates to redesign the road's overall corporate image. McGinnis wanted to distance the line from what he perceived to be an old fashioned and overly elaborate NYNHH moniker and instead offer the world a flashy and modern-day image. Knoll assigned the task to Herbert Matter, an up and coming Swiss photographer-designer. Matter had become known for his bold, succinct graphics and he seized upon a much simplified ‘NH’ emblem for the railroad. Employing a daring, large scale Expanded Egyptian font was the stroke of genius. Colour wise, it was out with the stodgy, somber greens, yellows and grays, replaced by black, orange and white.

Design wise, the new passenger locomotive scheme featured a geometric pattern, for the most part, unrelated to the shape of the locomotive. Gone were the large swooping curves and pinstripes previously popular for use in colour separation on the road’s Alco DL-109’s. As applied to freight locomotives, Matter crafted a very utilitarian pattern using changes in orientation to vary colour; black sides, orange ends. Large white NH initials were applied boldly to the sides. A handful of switcher/road switcher alternative schemes were also generated. Following publication in the annual report, what would become known as the 'McGinnis' scheme debuted on GE Erie built EP-5 No. 370 in late 1954. Freight unit wise, the McGinnis scheme first appeared on EMD SW1200 No. 640 in early 1956. No. 640 was also the first EMD unit on New Haven, virtually an all Alco/FM entity previously. While the NH was long ago folded into Penn Central/ConRail, the McGinnis scheme has proven to be incredibly durable. Following rejuvenation on Connecticut Department of Transport (CDOT) FL9's the scheme has been applied to all state funded motive power including newly built BL20GH commuter locomotives supplied by Brookville Locomotive. Mr. Matter's handiwork, now some sixty years on, certainly confirms the adage that sound design is timeless!

In similar fashion, towards the end of the decade, having invested in new fangled diesel power, CTC installations and continuous welded rail technology, among other modernization efforts,  Canadian National sought to rebrand itself and embarked upon a path parallel to the NH. What was known as the ‘CN Visual Redesign Program’ began in 1959. Under the leadership of President Donald Gordon the then multifaceted (railway/telegraph/hotel/express/marine ferry) corporation would look beyond the 49th parallel and engage the small Manhattan based firm James Valkus Inc. to accomplish the monumental task. To recognize the crown corporation status, i.e. government ownership, the agreement with Valkus stipulated that a Canadian designer was to be involved. Further to a series of interviews, Toronto based Allan Fleming was selected and the two set about their task. As is well known, the outcome was the infamous ‘Wet Noodle’ or ‘Lazy Three’ symbol. Perhaps not as well-known is the fact that the design was very much a collaborative effort between Valkus and Flemming. Acknowledging the Canadian component, Flemming was publically given full credit. However, much credit goes to Valkus for placing the new symbol on a grid pattern facilitating easy scaling; from letter head size to the forty foot moniker on CN’s Montreal Headquarters.

Colour-wise, some five years beyond the New Haven metamorphosis Valkus and Fleming would certainly have been aware of the colourful black/orange/white combination. While seemingly copycat, the CN scheme is actually black, ’CN orange’ and off white. The off white or light grey was chosen so as to acknowledge the dirt filled operating environment and so as to not have a freshly painted locomotive immediately appear ‘grubby’.

Following somewhat prolonged internal review and approval the ‘Visual Redesign Program’ scheme debuted in January of 1961, and as they say, ‘The rest is History!’