Okay, time to get back to something more relevant to my primary focus for this blog (well, in theory anyhow) – model railroading.

Tonight I thought I’d take a look at some of the differences between the Scale Trains Operator and Rivet Counter lines which offer differing levels of detail for their “crude oil tank car” model.

The advent of easy to reach light sweet crude oil in the Bakken formation extending over much of the United States and Canadian prairies spurned a boom in the need to move this oil to refineries. Whereas pipelines offer greater capacity, they are stubbornly fixed in place, while railcars can be routed anywhere on the North American rail network. This is particularly beneficial to refineries beyond the reach of pipelines, such as those near the Pacific or Atlantic coasts (many pipelines tend to run generally north-south).

While some of this demand could be met by existing equipment, new tankcars were required to handle this boom in oil traffic. Light crude is less dense than some other bulk liquid commodities so capacity could be expanded to just over 31,000 US gallons (30,000 gallons was the previous standard size). An industry-lead move to enhance tankcar safety resulted in the so-called CPC-1232 standard, whose key features over a standard 111A100W1 tankcar include: half-height head shields, fittings protection (in the event of a rollover), and increased tank thickness (9/16” vs previous minimum 7/16”). One builder of this new standard of car is Trinity Industries (the prototype Scale Trains modeled), which produced thousands of CPC-1232’s to meet the oil boom demand.

As noted previously, two versions of the car are offered: a basic model (“Operator” line) and a more detailed version (“Rivet Counter” line). I could tell you that “the model closely matches prototype dimensions”, but this isn’t Model Railroader. Instead, this post aims to identify some (not all) differences, and comment on the execution of each model. For this review, I acquire one of each version of the car, DPRX 259272 (Operator Line, Deep Rock Refining), and TILX 350417 (Rivet Counter Line, Trinity Industries Leasing fleet).

I think the concept of the Operator line is a brilliant move on Scale Trains’ part, especially for a car such as the crude oil model, which like the prototype is likely to operate in unit train consists. This appeals to someone wishing to run an HO version unit train, which would probably be prohibitively expensive to do with a solid train of Tangent-like quality. The Operator line comes with the same basic details including handrails metal wheels, side ladders, wire handrail stanchions, and most of the graphics. What it lacks compared to the Rivet Counter version includes:

This is not to say that this is a “cheap” version in any way – this model still exceeds the quality of some other RTR models, even including some newer Walthers releases (prior to their Proto line). The graphics are still razor sharp, and if desired, the modeler can still add most of the omitted details (e.g. hazmat placard decals, cut levers, air hoses). In fact, I think for the retail price of $22.99 US, this is indeed a bargain, especially considering it’s a new model, not a re-release.

Whereas the Operator line is a basic-detail version, I’d say the Rivet Counter line is above par compared to other high-end HO manufacturer’s in terms of details offered and their execution. Several details are noteworthy and not common to many other HO offerings including:

While Scale Trains did go above and beyond in some of their details, there was one gaff of note: some cars did not come with the yellow reflective conspicuity stripes. These stripes were made mandatory on new equipment starting in 2005, long before these CPC-1232 cars hit the rails. First built in 2012, all CPC-1232’s are equipped with the stripes; I believe the omission of stripes from some models was an erroneous effort to make the model applicable to modelers who want to depict the pre-stripe era.

Both lines come with well-designed packaging that includes a soft plastic sheet to prevent scuffs from plastic packaging shell (the manufacturers finally seem to have made this somewhat-standard on new models). The colour scheme and product numbering scheme for the two lines is similar, at first glance it’s difficult to tell which line is which. Personally I think two different colours would be a better way to differentiate the two lines, but it’s easy enough to do when looking at the front of the boxes.

This was Scale Trains’ first RTR offering in HO, and being a tank car (with a lot of exposed details), it’s not an easy thing to get right. And that they did – I think the split offering satisfies modelers at both ends of the spectrum, some desiring a few highly detailed models, others a whole train of slightly-less detailed models. The models are well-executed and if this is an indication of things to come from Scale Trains, Atlas, Athearn, Walthers, and others should take note that there is a new, serious, player in the game. I think their recent announcement of a carbon black hopper will only continue the success generated from the Trinity 31,000-gal crude oil tankcar.

I started writing this yesterday but the day got away from me, so presto-change-o, it’s now a “Flashback Friday” instead of Throwback Thursday (or as CP would say, running slightly late).

I find shortline railroading interesting – shortlines tend to do more switching and grunt work than Class 1’s, usually with smaller crew to boot. Add to that older power cascaded from Class 1’s and many shortlines have a lot to offer for the railfan. The first shortline in Ontario to be operated by an American company was the Goderich-Exeter Railway, operated initially from Stratford to Goderich (with a branch to Exeter) by Railtex. Established in 1992 the railroad featured an eclectic mix of motive power, initially three green-and-cream GMD-built GP9’s from the Cartier Railway in Quebec (each named for characters in Shakespeare plays), bolstered by a host of leased power, particularly in the winter months. Eventually leasing the CN’s Guelph subdivision from Silver (on the Halton sub) to London Jct in London, ON in 1998, the road required more power.

Initially a four-axle only road, the road’s own locomotives were supplemented by other units from other Railtex/RailAmerica roads (RailAmerica acquired Railtex in 2000). Some units were restencilled to GEXR reporting marks, some not; none were painted in the road’s green-and-cream paint scheme, but several wore Railtex’s pleasant red-and-grey paint scheme (e.g. 3821, 3835, 4019, 4022). Early power was primarily GP9’s but quickly more powerful 645-powered EMD’s showed up as the demands of running the expanded railroad meant longer, heavier freights. Eventually, six-axle power arrived with leased SD40-2’s and even a Florida East Coast SD40-2 and later an ex-SP SD45T-2 which remains on the road today. All this contributed to a rainbow appearance to the roster, with numerous paint schemes.

Today the road is operated by Genesee & Wyoming, after it acquired RailAmerica in 2013. G&W’s corporate orange paint scheme has been applied to several units now operating on the GEXR (as always, the roster is in a perpetual state of flux), but the railroad operates much as it has since it’s inauguration.

In the above photo by Gord Taylor, we see the following units on Sunday August 1, 1999:

‘Til Next Time,
Cheers,

A while back I had a Throwback Thursday about the changes over the years at CN's Bayview Jct, in Hamilton ON. Turns out I 'scooped' my dad who was coincidentally writing a similar article at the same time. So today is part II of our Bayview documentary, written by my dad Keith.

'Til next time,
Cheers,
Peter.

On a clear mid spring evening freshly painted Canadian Pacific SD40's 5541 and 5514 are about to duck under the Royal Botanical Garden's Laking Gardens pedestrian bridge as they pass through Bayview Jct. and lead the ‘Starlite’ mixed freight towards Burlington, Ontario. The named freight is a carryover from the days of the Toronto, Hamilton and Buffalo Railway, by this date a fallen flag having been fully absorbed by co-parent CP two years previously. Decades-old trackage rights permitted the competitor movement along Canadian National's historic Oakville Subdivision. However, nothing lasts forever and CP's trackage rights would expire approximately twenty years hence.

The right of way that the train is traversing was originally that of the Great Western Railway and dates from the mid 1800’s. In the distant background directly above the lead locomotive is the Desjardins Canal, sadly the scene of one of Canada’s first passenger train tragedies. On the evening of March 12th 1857, as a Great Western passenger train approached the canal  swing bridge, a broken axle on the locomotive caused the consist to plummet some six stories to the frozen waters below. Some fifty nine souls were lost in the calamity, including renowned railway contractor and banker Samuel Zimmerman. A fixed replacement rail bridge replaced the destroyed movable span, preventing the passage of ocean-going schooners through the canal. In time, a consequence of that decision would be the reversal of Dundas’ industrial prominence over Hamilton in the Great Lakes shipping trade. The four-posted highway bridge in the background, known locally as the High Level bridge, was constructed in 1932 by the city of Hamilton as part of a western entrance beautification/depression era unemployment relief program. 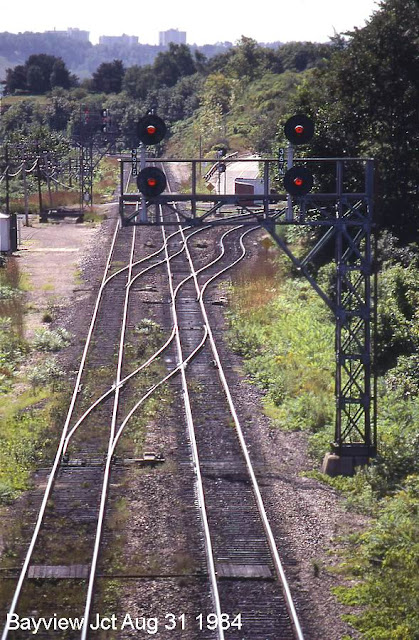 While the overall harbor view remains relatively unchanged decades on, the area's railway infrastructure has been substantially enhanced. In 2006 a third main track, extending westward to the junction was added to the harbor side of the existing double track right of way. Currently, in conjunction with expanded GO Train service to Hamilton and beyond, the third main is being extended further westward. Ongoing activity at the moment is focused upon an addition to the bridge structure spanning the historic Desjardins Canal.

As for the locomotives in the lead photo, CP SD40 5514 was built by GMD London in 1966. The unit was upgraded to SD40-2 specifications and equipped with Q-Tron electronics (to enhance tractive effort) prior to sale to the Dakota, Minnesota and Eastern Railroad, becoming DME 6081. The new owner would subsequently upgrade the venerable unit to -3 electronics. In something of an ironic twist, CP would re-acquire the survivor, included in its acquisition of the regional road. Likewise, CP 5541 was also built at the London facility, in 1967. Similarly upgraded to SD40-2 specifications the unit’s fate would be far less auspicious; retired in 2001 and subsequently sold for scrap in 2005.