Tonight’s Throwback Thursday features a shot of TH&B #71 westbound in front of the road’s station at Smithville, Ontario. The scan is from an undated Kodak negative from my collection, purchase a few months ago at a local train show (photographer unknown). Though we don’t have an exact date for the photo, we have a reasonable idea of when the photo was taken – before February 12, 1980. That’s that date when the locomotive – famously, the first Canadian-assembled engine built at General Motors’ London, ON plant – was destroyed in a fiery collision with a tractor trailer just outside of Welland, ON. But on this date, the engine appears unaware of its’ impending fate as it heads north (geographically west) with tonnage from US connections at Buffalo or Montrose, headed for Hamilton and maybe even Toronto. Finding a set of pure TH&B power was indeed a treat, particularly in the roads’ later years when increasing corporate influence by owner CP became evident in the number of CP units powering the railway’s trains.

Smithville, 20 miles southeast of Hamilton on what is now Canadian Pacific’s Hamilton subdivision, was once the junction with the Dunnville subdivision which ran 20 miles south through its’ namesake town to the Lake Erie waterfront town of Port Maitland, and the Erco (now Innophos Canada) phosphate plant therein. Unit trains of phosphate rock from Florida (“rock trains”) were steady traffic for a number of years on the TH&B, and along with unit sulfuric acid trains, generated good business for the branch. At one time, a car ferry provided the TH&B with American connections on the opposite shore of Lake Erie. A passing siding at Smithville still exists, and is the only place between Welland and Kinnear for the CP dispatcher to meet trains now that the Vinemount siding has been removed. Also removed was the wye at Smithville with the Dunnville branch; cut back in 2001 due to several wooden bridges being in poor condition, CP elected to revive a portion of the old CASO line between Welland and the od location where the Dunnville branch crossed the CASO at grade (E&O crossing). A short connector track was built in the southeast quadrant of the crossing to join the two lines, with  service to the phosphate plant now originating out of Welland instead of Hamilton. The 9.5 miles between E&O crossing and Smithville were subsequently abandoned and removed (even the overhead steel bridge over #20 highway in Smithville was removed). Happily though, the Smithville TH&B station still stands in its’ original location to this day, carefully preserved and in good condition. 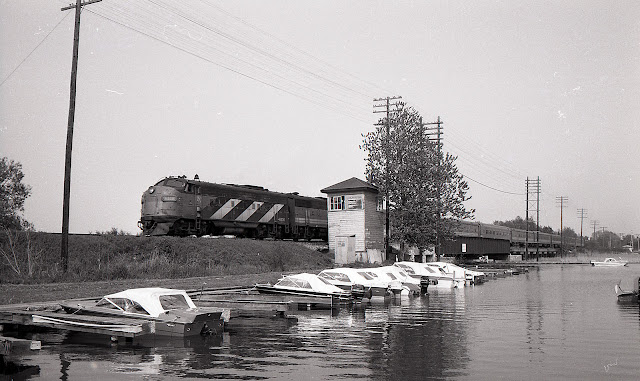 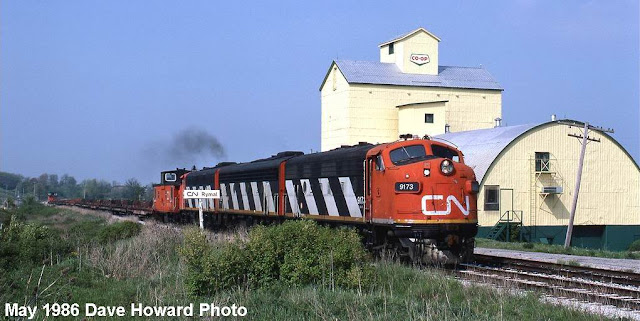 Tonight's Throwback Thursday features the second half of my Dad Keith's write-up of the namesake location for this blog. Thanks again Dad!
- Peter.

As mentioned in the previous Rymal anecdote, the former Hamilton and Northwestern Railway line would cling to life into the early 1990’s, finally succumbing to abandonment in 1993. However, the line did not vanish without a final blaze of glory!

Towards the end, the lightly-traversed branchline was a bastion of venerable CNR road power, including the long serving mainstay GMD SW1200’s, GMD GP9’s as well as the occasional MLW RS-18. However, as shown above, the most noteworthy and beloved units by far were the handful of CN’s infamous remaining snow service GMD F7’s. With no on-route switching demands, the F7 A/B consists were ideally suited to the inter-plant traffic pattern requirements of ‘The Steel Company of Canada’, aka ‘Stelco’, transporting continuously-cast slabs from their newer flagship facility in Nanticoke to the rolling mills located at Hilton Works, situated on the Hamilton waterfront. For an all-too-brief period, pure A-B-A sets as shown, and on occasion F7’s mixed with GP9’s ferried 60 ft flatcars, equipped with specialized slab cradles, from lakefront (actually Hamilton Harbour/Lake Ontario) to lakefront (Lake Erie). While more than a delight for the local railfan community (See ‘F Units on the Nanticoke/CN 9100’s produced by Green Frog Productions, www.greenfrog.com shot by area enthusiast Rob McCormack), some operational concerns were voiced.  Lower city dwellers became increasingly concerned about the potential for a loaded runaway slab train descending the escarpment without brakes, careening through their community. This, despite the fact that the line had crested the geographical outcrop in the mid 1870’s and had been disaster free for well over a century! As the unlikely catastrophe dialogue was heating up, the matter was resolved by an unforeseen event when the bridge over Stone Church Road (located approximately under the trailing caboose) was displaced by an over-height transport truck – see photo below. Owing to the compromised structural integrity of the span, rail traffic was suspended south from CN’s Stuart St. yard (the alternative, much more circuitous routing, involved movement from Stuart St. yard to Brantford along the Dundas sub, then back to Caledonia to rejoin the former H&NW line). As if to add an exclamation point, the span was displaced in the opposite direction, shortly thereafter, by another unfortunate truck encounter. This time the injured bridge span was lifted and placed perpendicular on the right of way! As previously mentioned, much of the H&NW chartered line remains as the ‘STONE CHURCH ROAD RAIL TRAIL’. North of Stone Church Road the former right of way is known as the ‘ESCARPMENT RAIL TRAIL’. One can walk or ride their bike past them, but no longer does the sound of normally-aspirated 567's echo off the concrete silo walls...