Today’s Throwback Thursday takes us back to November 1, 1968. We’re at General Motors Diesel Division (GMDD) in London, Ontario where we find brand new Canadian National SD40 #5070 ready for release. In the background we observe another SD40, although it will go to work for rival Canadian Pacific. How to tell? Close examination reveals a number of differences between CN & CP SD40’s; CP SD40’s featured cab-side rain gutters (not sun shades), snowplow instead of rock plow, a different MU plug arrangement, tight-lock couplers instead of conventional coupler, different air tanks (one large instead of CN’s two smaller tanks on each side) and (especially to modelers), different stairwell (step) arrangements. Another painted CN SD40 off in the distance. Perhaps this is an open house to show off the latest-and-greatest in Canadian motive power? Maybe, but the reason for this interesting pairing of engines may well be lost to history…

About the London plant: General Motors opened the plant at London in late 1950, at a time long before Free Trade permitted easy import of goods to Canada from the US (without costly import tariffs). Facing competition from Montreal Locomotive Works and, to some extent, Fairbanks-Morse (under license to Canadian Locomotive Company), GM constructed the branch plant to supply Canadian roads with new diesels. Toronto, Hamilton & Buffalo GP-7 #71, famously destroyed in a wreck in February 1980 east of Smithville, ON, was the first locomotive completed at the new plant, and was soon to be followed by many more engines for CN, CP, and other Canadian railways. With its’ busiest year in 1958, the overwhelming majority of diesels built for Canadian roads over the next 35 years or so were built in London. When EMD stopped production at its’ primary manufacturing facility in La Grange, IL in 1989, all GM locomotive production was consolidated to the London plant. The plant then handled all production for not only North American railroads, but also did brisk business manufacturing locomotives for export to countries all over the globe. A declining market share, however, eventually lead to the sale of GM-EMD to Greenbriar Equity Group in April 2009, which included the London plant. Run for a number of years under Greenbriar ownership, the former GM-EMD assets were sold in 2010 to Caterpillar Inc. As part of their Progress Rail division, the London plant operated until 2012 when it was shuttered in favour of manufacturing capacity at their new Muncie, IN locomotive plant. The last diesels to be constructed in London were an order of Kansas City Southern SD70Ace’s, with KCS 4130, 4131, 4133, 4135 and 4136 leaving the plant on September 25, 2012, bringing an end to 62 years of locomotive manufacturing in London.

What about CN 5070? Following its’ release from GMDD London, the engine enjoyed a long career with CN, eventually being repainted into the popular “zebra stripe” scheme. The engine changed little mechanically over the years, eventually gaining a new snowplow and snow shields, along with new horn, ditch lights, winterization hatch and rear rock plow. Though CN initiated a program to rebuild their SD40 fleet in the mid-1990's, it was soon realized that the per-unit rebuild cost was relatively high compared to the cost of purchasing a new unit. Declared surplus, the engine was leased in 1998 to Quebec Railway Corporation for use on the New Brunswick East Coast railway. Less than a year later, the engine was retired in 1999 after 31 years of service. A new lease on life was granted after rebuild by GEC-Alstom in spring 1999 and the engine was released as Chemin de Fer Matapidia et du Golfe (CFMG) #6909 in a solid black paint job. After nine years of operation in southern Quebec, a sale of the QRC operations (CFMG, NBEC and Ottawa Central) to CN in 2008 spelled the end of the line for the engine. Ironically purchased back by its’ original owner, the engine was shipped to the Homewood, IL shop to await disposition. Resold to Allied Services (A division of Allied Equity Group), the engine traveled to Georgianna, AL as ASDX 6909, where it ultimately met the torch.

One has to wonder if CN 5070 and the unknown CP SD40 ever crossed paths again – likely not, but who knows?… 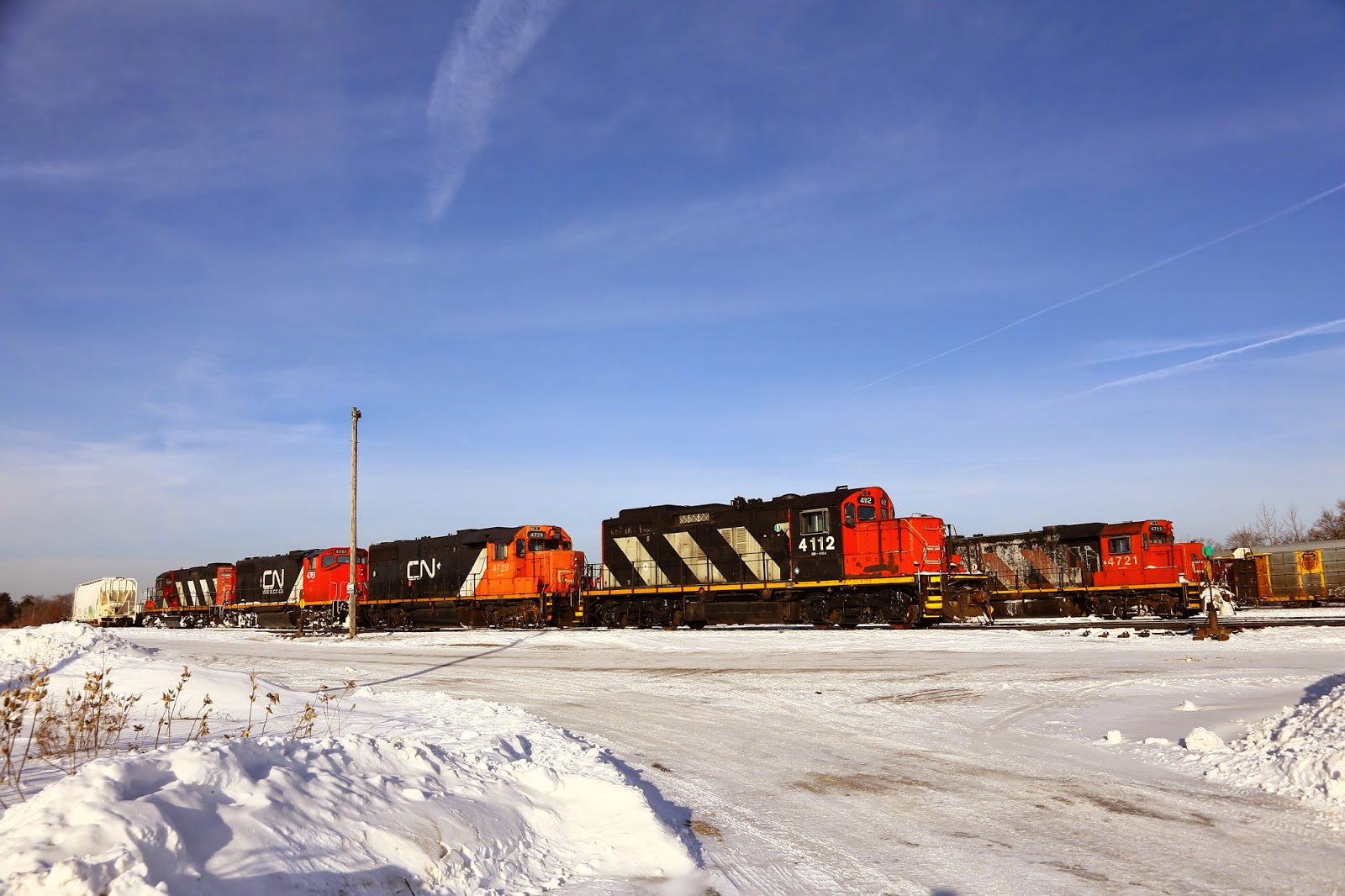 I think I promised this a long time ago, but I finally found some time to photograph and write about some more of the progress made on the layout in the last couple of weeks. Without further delay, onto the photos!

My brother Mark made quick work of installing rails in the Stelco rolling mill. As-designed, Walthers intended for cars to roll into the building on channels cast into the floor of the mill, not on actual rails. This meant that it was not possible to operate a locomotive in the building, as there was no way to supply power, nor actual rails to be powered. Mark carved channels into the floor large enough to lay some code 83 rail inside, secured by CA glue. At the moment, the end panels of the building are not installed, but will be once work on the interior is completed. Elsewhere, gaps in the ties are being filled with spare ties in preparation for painting and ballasting to be completed soon.

Additional work on the switches has been completed, exchanging the existing throw-bars with copper-foil covered ties (to isolate each half electrically). With the shop tracks to the shop building now installed, the only remaining track to be laid on the layout is the two tracks to the turntable and the four tracks to the roundhouse/RIP track. I’ll post a future update about the shop building and roundhouse, but for now I should mention that they will be essentially side-by-side, with the intent to separate steam and diesel servicing operations. The roundhouse is a modified three-stall Atlas kit that Mark extensively reworked to make the track angular separation suitable use with our turntable (larger than the Atlas version); the Atlas roundhouse is set up for 15° track spacing, whereas our turntable requires spacing of about 10°. The diesel shop is a scratchbuilt representation of the CN shop at Stuart street yard in Hamilton, Ontario, though I made my version longer than the prototype in order to fit an SD9043MAC inside.

Mark has also done some more electrical work on the layout. Some more feeders have helped improve operational reliability and the shop tracks have been isolated such that power can be stored on the layout without consuming power.

I hope to have another layout update in the next week or so, stay tuned!

This Past Sunday I had the opportunity to attend the annual Canadian Association of Railway Modelers show at Copetown, ON. This show is quite different from most other trains shows in that the theme is the display of high-quality modeling and prototype research rather than the typical flea-market wheeling-and-dealing at your average train show. I particularly like this show because it often features many operating layouts, something that seems increasingly less common at the flea market shows. It is always inspiring to me to see a completed layout, or even one that is partly completed to see how other modelers innovated or overcame obstacles to create a model of something that they are passionate about.

One downfall of the show is that given its’ time in the year, it often suffers from bad weather which seemed to be the case this year. There were a handful of empty tables and it was noticeably less crowded in the aisles. Only one operating HO layout (the Ontario and Quebec Railway) was present but a handful of larger-scale switching layouts were in attendance; I tend to think the poor road conditions kept a lot of people from going to the show. As always, a number of historical societies and photo dealers were in attendance as well as several model manufacturers, such as Rapido Trains.

Rapido brought samples of several of their recent projects, including the LRC locomotive, FPA-4 (A and B-units), FL-9 and F40PH-2. A small test track served to demonstrate the models’ operating (and to me, more impressively) sound performance. They indeed put a lot of effort into each of their products. Surprisingly though, there was little mentioned about their recently-announced RDC project. They did however bring a small switching layout to demonstrate their Rail-crew recent announcements, a magnetic uncoupling gizmo and switch motor (with operating switch stand). It will be interesting to see how this goes for them, though I can’t imagine that having another supplier of switch motors is a bad thing.
Another noteworthy item at the show was George’s Trains line of new acrylic paints (Proto-Paint), which fortunately features a number of Canadian railway colours. 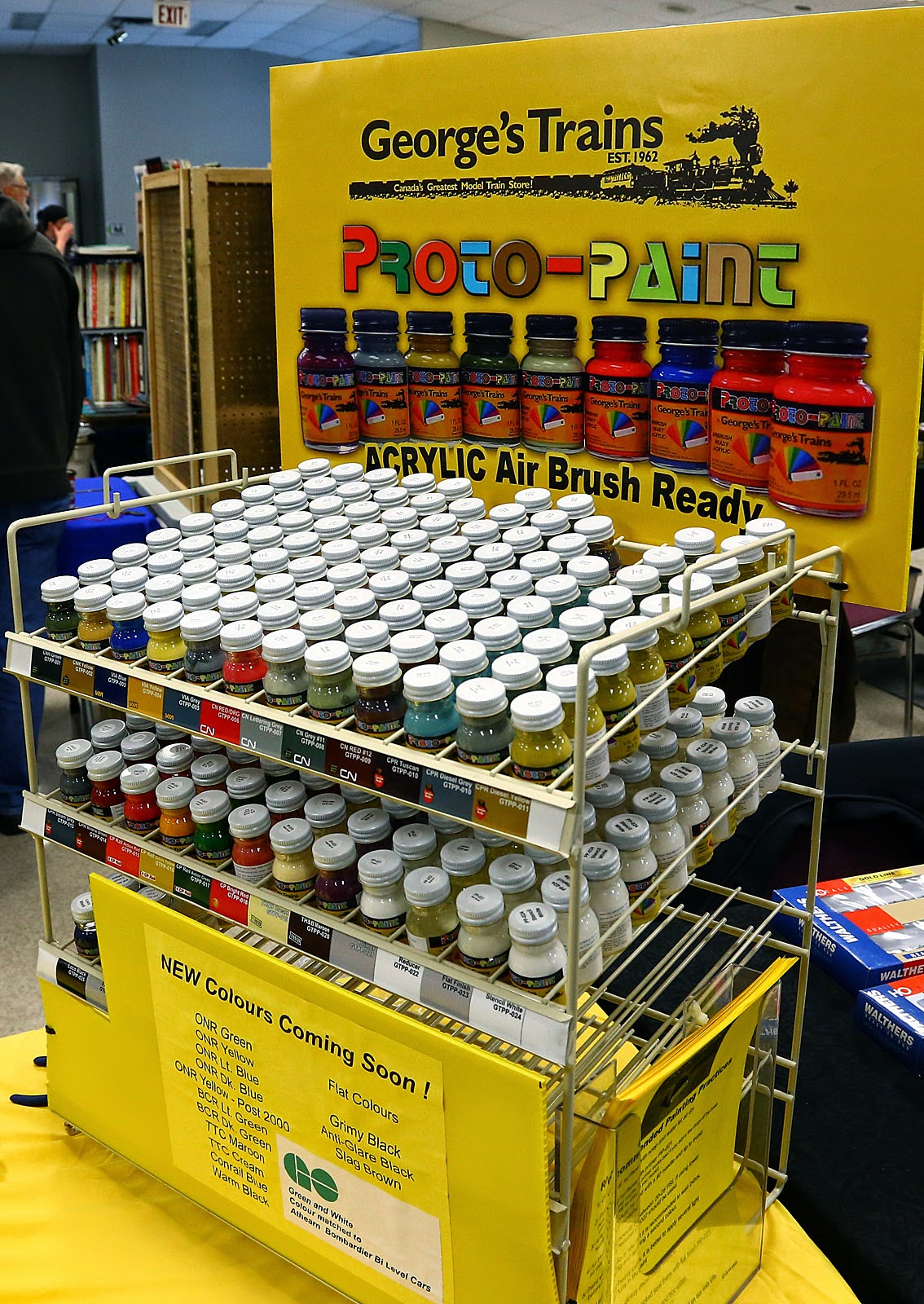 Cheers,
Peter.
Posted by Unknown at 10:19 No comments:

Well, I didn’t plan to do this as an F-unit Friday but once again Throwback Thursday was running late. We’re at Banff, Alberta, in August 1963 where we find CP 1432 leading the westbound Canadian in the late afternoon sunshine. There are a number of things in the photo that struck me as “really interesting” and help turn it into a mini time capsule of sorts.

First, the keen observer will note that the trailing unit on the train is in fact a Fairbanks-Morse engine. While CP did tend to keep the FM’s in the west, it is probable that not often they could be found on passenger trains (note the FM style of truck as well as radiators/exhaust stack). Likewise, the use of an SW1200RS in the west seems somewhat unusual. Typically associated with use on the DAR or Ontario branchlines, a switcher was maintained at Banff for a number of years to switch cars on and off the passenger trains stopping at Banff. Then, as now, the town remains a popular tourist destination, though the town’s connection to the railway is not what it once was. On top of CP 1432 is an interesting feature unique to the Canadian (not the icicle breakers) – the high-powered light aimed toward the sky used to illuminate the mountains as the train passed through them in the night. The idea was to light up the scenery for passengers riding in the dome cars, and even if it did not work too well, is an example of the blue-sky thinking that has largely disappeared from today’s railroading, and in particular Canadian passenger travel.

Additionally, it appears that the summer popularity of the train has exceeded what capacity the classy stainless Budd cars could provide, thus requiring that a number of older heavyweight cars be added to the train. A number, including some on this train, where painted with aluminum paint in an effort to blend them in with the rest of the consist, however it appears that a plain-jane maroon car has also been pressed into service. A lightweight CC&F baggage car has also been added and disturbs the streamlined stainless motif of the train.

While a Google street-view of the scene today shows that it is much the same (but with taller trees), the train in the photo above has indeed come and gone. CP 1432, built as #4041 in 1951 at GMDD London, was renumbered to 1432 in 1955, only to be renumbered back to 4041 in 1966 before again becoming 1432 in 1969. It was sold to VIA Rail upon formation of the crown carrier in 1978 but was later returned to CP and subsequently scrapped (despite a full repaint into VIA colors). CP 8129 served CP for many years before ultimately meeting its’ demise in a wreck at Laval, Quebec; it was subsequently sold to Andrew Merrilees in 1998. Many of the Budd stainless cars ended up being rebuilt by VIA Rail in their HEP refurbishment program and continue in service although the heavyweight coaches, baggage car and the FM unit likely have all long since been turned into razor blades.

Cheers,
Peter.
Posted by Unknown at 19:23 No comments: