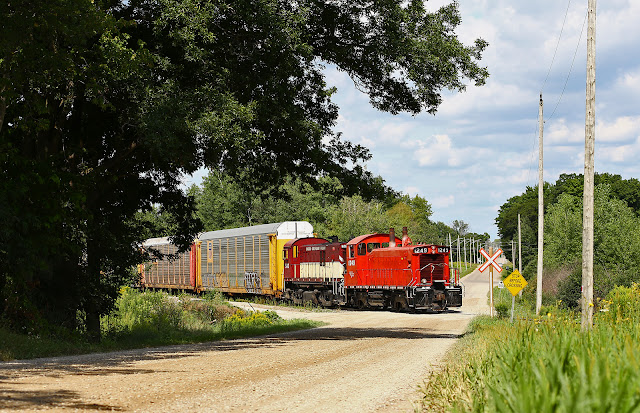 Tonight's Throwback Thursday features another article by my Dad, Keith. I've been meaning to explain the significance of why I named this blog "Rymal Station" (can't recall if I have already), but hopefully this will help explain it. Part 2 to follow. Thanks Dad! 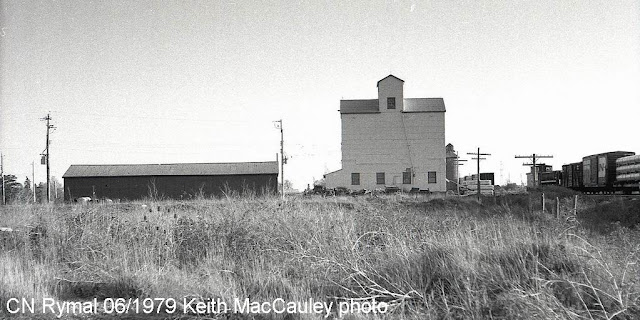 An early summer evening finds a pocket-sized Canadian National wayfreight pausing to retrieve an empty bulkhead flatcar from the CO-OP siding at Rymal, situated in the Southern Ontario hamlet of Hannon. Hannon, while not a locality ever identified on any map, was situated just above the Niagara Escarpment on Hamilton Mountain (as referred to by ‘Hamiltonians’). The CNR branchline is the former Hamilton and Northwestern Railway ROW built to link Hamilton with the Lake Erie community of Port Dover. After coupling up and performing the requisite brake test, the tidy consist will trundle northward, cautiously descend along the previously-mentioned geographical feature, cross over the T, H & B main line and swing onto Ferguson Avenue to do some street running prior to entering Stuart Street yard located along the Hamilton waterfront. Out of frame, at the head end is CN GP9 4521, with the following consist in tow:
- bulkhead flat car (CN 606000 series)
- 89 ft flat car (CN 668091 – built 12/1975)
- 40 ft single door boxcar (BN 199778)
- 40 ft livestock car (CN 810189)
- 50 ft MOW tie gondola (CN 60223)
- Pointe St. Charles Caboose (CN 79800 series)

The collection of buildings (except for the cylindrical concrete silos located behind the tall structure on the right) is part of what once was known as the ‘Ancaster CO-OP’. Constructed in the mid 1940’s following the conclusion of WW II hostilities, the farm, feed and hardware supply enterprise was geographically misnamed by design. The long term plan by the original share contributing owners was to relocate to the neighboring named community once an alternative to rail supplied raw materials could be organized. No doubt the expanding local highway system and truck transport were the anticipated methodology. However, such plans never materialized and today, after serving in their original intended purpose for decades, the structures shown still exist and have been incorporated into a thriving Home Hardware installation.

The fate of the Canadian National branchline? Despite a daily Hamilton-Nanticoke steel slab train that gained the line fame in its' later days, the former H&NW line suffered from diminishing traffic into the early 1990’s, and would eventually be lifted in 1993. Service south from Hamilton would be suspended in the late 1980’s following the lateral displacement of the Stone Church road overpass (in both directions!) by transport truck collision. Today, much of the ROW remains as the ‘STONE CHURCH ROAD RAIL TRAIL’. 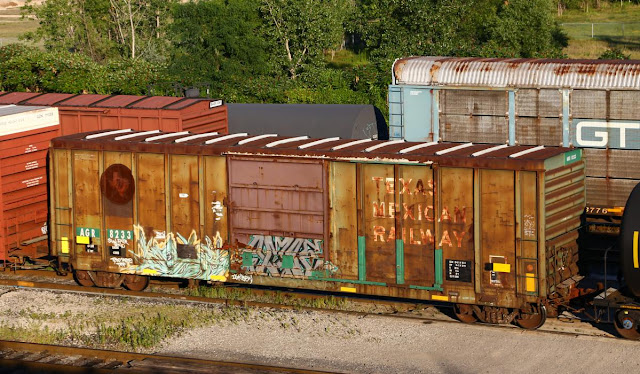