The CN diesel running repair facility located on the south edge of the Stuart Street yard complex was a pocket sized instalment with all of the required elements compressed onto the property. The diesel shop was a modern, relatively small, heavily windowed structure with two tracks; both equipped with drop pits. The building was sized to accommodate four switcher units or a pair of longer locomotives as needed. Companion service items positioned on the west side of the shop included fuel storage tanks, a sand tower, and an outdoor inspection station equipped with access platforms and grating/spill containment.

Constructed in the early 1960’s following the demise of steam, the facility would have hosted a wide spectrum of motive power through the years. According to ‘IN MY OWN WORDS’ in the July 2018 issue of Trains Magazine the selection of motive power resident in the mid 1960’s was that of an locomotive enthusiast’s dream;  FM C-Liners, MLW S-3/S-4’s, FPA-4’s as well as GMD F9’s, GP9’s, GMD1’s and SW1200RS’s. Occurrence of the passenger units at the time was related to CN’s Hamilton to Toronto commuter service obligation; GO Transit Corporation was on the cusp of formation. The commuter locomotives and MLW switchers were assigned to Stuart Street and thus would have received their regulatory ninety-two day inspections in-house. The GP9’s and SW1200RS’s would have been maintained at their respective home base(s) and only received attention at Stuart Street as required. Aside from minor updates; additional exterior lighting, etc., and routine maintenance; new roll up doors and replacement windows for example, the diesel shop remained relatively unchanged for the better part of half a century.

Over the years access to the facility, in my case outdoors only - typically on weekends, was very open with virtually no security about. Staff when encountered was friendly and for the most part mostly unengaging. On occasion, a CN Police vehicle would drive through the grounds looking for anything that might be out of the ordinary or of interest. Interactions were always friendly happenstances. I only wish I had made more sojourns to shop during these seemingly more innocent times.

On December 15th 1997 CN would enter into a long term lease agreement of the Stuart Street Yard facility with RaiLink Southern Ontario. RaiLink was acquired by Rail America in 2000 who in turn would become part of short line goliath Genesee and Wyoming Corporation in 2012. Changes to the diesel shop began to unfold following CN’s departure. Virtually all of the external appliances were razed; gone in relatively short order were the sand tower, fuel storage tanks and inspection track accessories. Importance of the location as a diesel service facility would continue to diminish as the tenant years passed. In 2013 the Metrolinx commuter agency announced an agreement with CN that would result in the property being re-purposed for expanded GO Train service to Hamilton at a new station to be known as ‘Harbour West’. By September of 2014 no evidence of the former ‘running repair’ facility remained.

By the early 1980’s the era of the GMD SW1200RS trundling along the former H&NW right of way in pairs or triplets was all but over. Motive power deployment along the line became a fairly predictable pattern of veteran GP9’s in various states of dress and detail. Most were decorated in the 1973 ‘Zebra’ scheme, albeit in contrasting condition; from recently repainted to desperately needing to be repainted. CN’s lack of interest in the appearance of their GP9 fleet at the time was understandable given the concurrent remanufacturing plan. Launched in 1981, CN’s massive Pointe St. Charles based GP9RM refurbishment program would ultimately recycle some four hundred ‘Geeps’ into a mixture of road switchers, yard switchers and slugs. Nevertheless, even with the inherent uniformity, there was the occasional motive power surprise. Despite their Montreal and points east operating base, the odd MLW product would show up. As well, locomotives being repositioned or ferried for maintenance work would on rare occurrence be included in the consist. Overall, it was a thoroughly fascinating but all too brief an epoch. 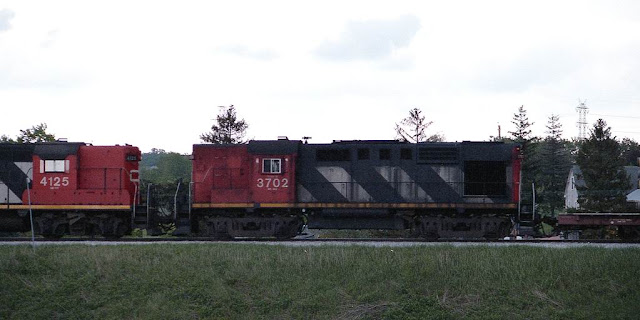 While the 1960’s and 1970’s were the preserve of CN’s ubiquitous SW1200RS, motive power along the former H&NW over the following years until abandonment primarily consisted of Dick Dilworth’s seemingly omnipresent GP9. The transition is entirely logical. Throughout the middle to late 1970’s CN took delivery of several hundred GMD wide cab GP/SD40-2’s, displacing older/lower HP locomotives from mainline and higher priority manifest service. Despite relatively low traffic volume along the H&NW, the right of way and track structure were well maintained and could easily handle the nominally larger road units. Thus, tonnage that on occasion required three end cabs could easily be conveyed by a pair of ‘Geeps’. Often, as shown, a single GP9 was sufficient.
While interchange traffic continued to diminish, there were a couple of ‘Last Hurrah’s’ for the line. As noted above, the local pipe coating enterprise landed a sizeable contract related to a major Western Canada pipeline project. Probably much better known was the movement of cast steel slabs from Stelco’s newly commissioned Lake Erie Works to their Hilton Works based rolling mills in lower Hamilton. Unfortunately, due to the Stone Church bridge transport truck incident in 1987, the Rymal segment of this trip was rather short lived – see CN Rymal Pt. 2.

This past weekend, my dad, brother, and I attended the annual train show at Copetown, ON, known for being more of a showcase of modeling talent than of the more common flea-market type. This year was no different, with many models displayed by local modelers, an operating S-scale layout, and several photo and model scenery vendors. The weather was perfect with clear blue skies, so we turned up early in order to take in some railfanning before the show, though CN was a bit less cooperative than desired with only CN 385 making an appearance (photo angles a bit less than desirable). Still, it was a great chance to talk with old friends and make some new ones. I'll let the photos do the talking...

This time we’ll take a look at the type of diesel power deployed by Canadian National to the south out of Hamilton. By the mid 1970’s motive power assignment along the former H & NW right of way was typical of most Canadian National branch line operations of the day; the ubiquitous SW1200RS. Most likely the pattern would have been the same in the 1960’s early post steam era. Unfortunately, I have yet to come across any photos of this period to confirm that this was in fact the case. As previously mentioned, the late steam era was wonderfully documented in Ian Wilson’s fabulous chronicle ‘Steam Echoes of Hamilton’.
Scheduled operation throughout the 1970’s was daily except Saturday. On rare occasion an extra would be sent out on the weekend, guessing due to traffic demand or other unusual circumstance. After reporting for duty at CN’s Stuart Street Yard in the early morning the crew would assemble their train, depart eastward, and swing off the Hamilton-Niagara mainline to do some street running in the lower city along Ferguson Avenue. After clattering across the T, H & B line at its base the train would conquer the Niagara Escarpment, zip through Rymal, and run south west to near the shore of Lake Erie. Depending upon the amount of switching/interchange activity at the south end terminus, the crew would normally transit back through Rymal in the opposite direction in the early evening. Remarkably, up until the delivery of PSC vans (caboose) and their immediate deployment to mainline traffic, all trains were trailed by CN’s well maintained wooden vans. Power wise, the normal compliment was two units, back to back as shown, so as to not have to worry about reversing the consist to return home. However, it was not uncommon for the amount of tonnage to require a third unit, still arranged so that there was always a long hood at each end. Traffic was always much heavier southbound and on occasion, the northward move would be light power. Apparently when the lack of tonnage permitted, crews of MU’d SW1200RS’s would idle the lead unit (or all but one trailing unit) so as to provide a quieter ride. Not sure if it was the practice on this line?
CNR SW1200RS production by General Motors Diesel Division in London Ontario
Posted by Tato at 19:21 1 comment: