Today’s Throwback Thursday takes us back to the Winter of 1972. We’re at Galt, ON, standing in front of the CP depot that still bears the name of its’ Scottish novelist namesake (John Galt). A year later, the civic merger of Galt, Preston, and Hespeler would result in the city of Cambridge, where the modern counterpart photo was taken (even though I’m standing essentially where photographer Chuck Begg did 42 years earlier, I’m in another city!).

In this view, we see a CP westbound extra lead by three MLW C424’s, with the lead unit #4238 still in it’s as-delivered classic Tuscan and grey paint scheme. The unit is seven years old, built in 1965, and would survive another three years before being repainted to CP’s attractive Action Red paint scheme in early 1975. The engine would serve its original owner for 33 years until a sale in 1998 to New Brunswick East Coast Railway took the unit to the Maritimes. As Alco/MLW technology faded from the shortline scene, the unit was sold for parts to sister railroad Ottawa Central before being scrapped in March 2004.

Not only are the Burlington Route boxcar and the head-end stock cars long gone, but the scene itself has changed substantially as well. Absent in Chuck’s photo is the #8 highway/Dundas St. bridge constructed over the Galt yard and Galt Sub mainline. Auto traffic now dominates activity in the yard with a Toyota manufacturing plant located on the old Grand River Railway line a few miles north of the yard (the line merges into the yard near the Burlington boxcar on the other side of Samuelson street).

Though the scene has changed, Galt is still a busy place with several through freights and a daily local passing through on the main line. A pair of locals based at Wolverton yard east of Woodstock also call on the yard, heading up the old GRR line (CP Waterloo spur) to serve the Toyota plant. Additionally, the station and freight shed still stand, so it’s still possible to relive the scene in Chuck’s photo – too bad the MLW’s are gone though! 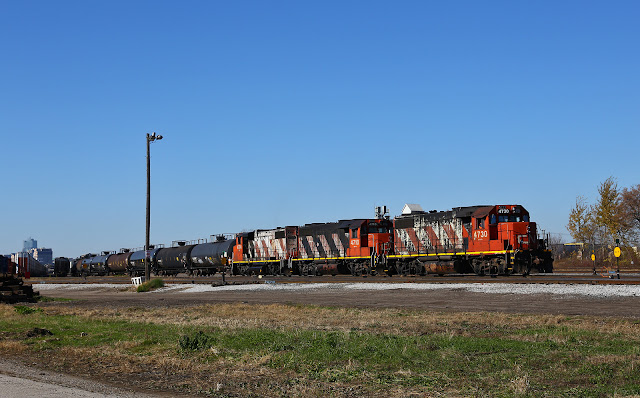 Like a lot of modelers, other hobbies and pastimes have displaced some of my ‘train room time’ over the summer, but now that the fall is upon us with the short days and cold weather probably not far off, its back to indoor activities for me, which includes updating this blog on a more regular basis.

Anyway, that brings me to tonight’s Throwback Thursday – back to 2006. The image is not as old as the others that I’ve discussed in other TT’s, but it is ten years ago (!). Who’d have thought it was already ten years since Gevo’s were the latest thing on the motive power scene, Bayview had only two tracks, and “Tier 4” was a phrase no one cared about at the time. Well, funny how time flies, eh?

Here we see a Bill McArthur photo of CP #249 heading east on CN’s Oakville sub at Bayview, using decades-old trackage rights to get to Canpa, near Mimico, and back to home rails instead of climbing the steep grade up to Guelph Jct. The train is passing the work zone that is adding a third track for expanded GO Transit service to Hamilton. This meant widening the fill next to Sunfish pond, and more importantly for railfans, removal of trees that obstructed the photo angles from the Laking Gardens bridge (I’m sure to the chagrin of a lot of environmentalists).

Ten years later, it’s funny how history repeats itself – current GO Transit expansion to West Harbour station in Hamilton has again meant installation of a third track from Bayview to Bay street in Hamilton (previous third track terminated at Bayview). The current phase has the extra complexity of bridging the Desjardins canal, a feat that is nearing completion. Expanded GO service to West Harbour in the future, along with GO’s new layover yard at McNeally road in Winona will be sure to add even more trains to the already-busy Bayview area (granted, they are “window trains”). Unfortunately though, CP trains no longer use CN’s Oakville sub after trackage rights expired in 2008. The Gevo’s now aren’t the latest thing on the motive power scene, replaced by Tier-4 units (on CN, at least), and in another ten years will probably just as dull as they are now. But at least they were interesting when they were new…