A couple of weeks ago I had the opportunity to spend a few days in Halifax with my sister. Though most of the time was spent wandering around the downtown area, and checking out whatever tourist shops (and pubs) were open, I did find some time to do some railfanning, though some of it was merely a result of being in the right place at the right time, with camera ready to go. Overall, the weather was cooperative - not really all that cold - and the people were extremely friendly, and the railfanning not bad to boot.


On the second day in town, I rode the ferry to Dartmouth, where CN maintains a small yard next to the Alderney ferry terminal. Primarily serving an auto terminal nearby, the yard mostly handles autoracks with cars to be loaded for import/export. The day I was there was clear and sunny, and I was lucky to catch CN 8843 & 5768 moving around the yard. I believe the 8843 had developed engine trouble as it wasn't running and had a few CN employees inspecting the open hood doors. CN 5768 then went on to do some switching further north.


On the third day in Halifax, I was able to catch two different yard movements (one, in not both, was L501 I believe) that were servicing the container terminal at the south end of the peninsula. The first job had GP38-2W #4772, in relatively new paint, and ex-GO Transit GP40-2W #9673 for power and they lifted 42 cars out of the container terminal (loaded containers from arriving container vessels) for movement westward. Later in the day, CN GP40-2W #9639 brought 38 loads down into the terminal. After leading the movement into the yard (the Young street bridge offers a terrific view of the port area), the locomotive ran around the cut of cars before shoving them onto an empty track on the dock. Shortly after CN 9637 arrived, VIA 15, the westbound Ocean departed at 13:00 with VIA 6452, 6437, and 6431.

I was amazed to discover that Marginal road runs pretty much through the middle of the port terminal. At first I thought the road was strictly for truck traffic bringing containers into the port, but after observing many joggers running down the sidewalk (from the Young St. bridge), it dawned on me that it was open to the public. The road, complete with wide sidewalks) offers a rare and fascinating view of the inner workings of a modern port. Among the things I was able to observe were the Canada Steamship Lines vessel ATLANTIC HURON, a dock where CN was importing rail and loading it on 85' flatcars, a Parish & Heimbecker mill, and an X-ray scanner through which trucks bringing containers into the terminal had to drive. In all, for any student of modern industry, a walk down Marginal road fascinating way to spend a morning.

'Til next time,
Cheers,
Peter.

Tonight's Throwback Thursday is penned by my dad Keith. A slightly different layout for a TT, rather than discussing a single photo from my collection, presented below is a short history of the Alberta Gas Chemicals tank car fleet.

'Til Next Time,
Cheers,
Peter. 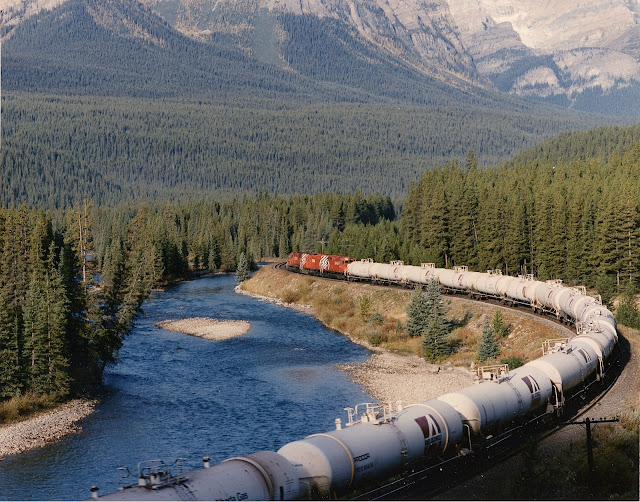 Undoubtedly, among the most instantly recognizable North American rail photo locations is Morant’s Curve located in the province of Alberta. Named for the legendary Canadian Pacific Railway corporate photographer, the iconic ‘S’ shaped right of way is located NW of Calgary in Banff National Park, adjacent to the Trans-Canada Highway. If one happens to venture to Canada’s oil producing province, directions are as follows; travel westward on the Trans-Canada approximately 200 km from Calgary until you reach the Lake Louise turn off. Double back to the first right, Bow Valley Parkway (Highway 1A), and continue for about 4 km to the Outlet Creek viewpoint. Note that the sign is only visible when traveling eastward. For those so equipped; GPS coordinates: N 51 deg 23.980 min, W 116 deg 07.638 min.

Shown in the above photo (CP Corporate Archives E6736-2) is a trio of CP’s once ubiquitous SD40-2’s at the head end of a methanol unit train. Unfortunately there is no date on the photo. However, there are several helpful timeframe clues. Number 587X can be made out on the rear of the very clean middle unit and all three locomotives are decorated with the smaller ‘Pac Man’ multimark and larger 8” wide diagonal stripes. GMD London delivered SD40-2 nos. 5865 – 5879 in October/November of 1984. As information, diagonal end stripes were revised from 5” to 8” in 1977 and CP standardized on the small MultiMark in 1979.

The unit train is comprised of 30,000 gallon (nominal/usg) non-insulated tank cars, mostly decorated with the large red and white ‘ALBERTA GAS CHEMICALS’ logo. The consist is a mixture of AGCX tank cars, owned by Alberta Gas Chemicals, and PROX tank cars owned by Procor. Note that both AGCX and PROX tank cars sport the large AGC emblem. Note also that four of the PROX tank cars simply have ‘Alberta Gas Chemicals’ spelled out as lettering – see below. Also as shown below, the Procor owned tank cars were originally stenciled with UTLX reporting marks - ‘PROX’ was introduced in 1981. In 1990, Procor purchased the entire AGCX fleet which at the time consisted of fifty cars built by Procor Oakville in 1978 (AGCX 10000-10049) and one hundred and eighty cars produced by Hawker Siddeley Transport in Trenton Nova Scotia, 1981/1982 (AGCX 10050-10229). A quick identifier of the Procor built tank cars, both AGCX and PROX, is the prominent reinforcing ring at each end). The new owner was obligated to paint out the AGC emblem ASAP.

Alberta Gas Chemical was a 1970’s origin subsidiary of Nova Corporation of Alberta, whose beginnings date back to 1954 when it was incorporated as The Alberta Gas Trunk Line Company Ltd (AGTL). Methanex Corporation acquired in whole Nova’s methanol business and operations in 1994.

Date of the photo? As related above, the date bookends are 1984 and 1990. All clues factored in, and based mostly on the very clean appearing 587X and relatively pristine condition of the trailing coupled unit: 1985.

Now for some close-ups: